“I saw this elderly gentleman dining by himself, with an old picture of a lady in front of him. I thought maybe I could brighten his day by talking to him.

As I had assumed, she was his wife. But I didn’t expect such an interesting story. They met when they were both 17. They dated briefly, then lost contact when he went to war and her family moved. But he said he thought about her the entire war. After his return, he decided to look for her. He searched for her for 10 years and never dated anyone.

People told him he was crazy, to which he replied “I am. Crazy in love”. On a trip to California, he went to a barber shop. He told the barber how he had been searching for a girl for ten years. The barber went to his phone and called his daughter in. It was her! She had also been searching for him and never dated either.

He proposed immediately and they were married for 55 years before her death 5 years ago. He still celebrates her birthday and their anniversary. He takes her picture with him everywhere and kisses her goodnight.

Some inspiring things he said;

“I was a very rich man. Not with money, but with love”

“I never had a single argument with my wife, but we had lots of debates”

“People are like candles. At any moment a breeze can blow it out, so enjoy the light while you have it.”

“Tell your wife that you love her everyday. And be sure to ask her, have I told you that I love you lately?”

Be sure to talk to the elderly. Especially strangers. You may think that you will brighten their day, but you may be surprised that they can actually brighten yours.” 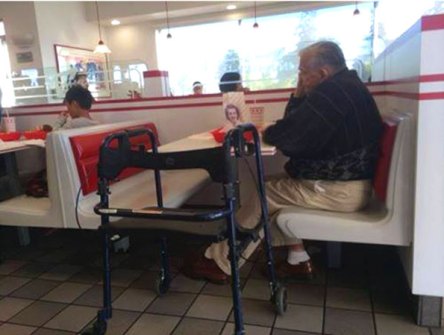 You may know of the work of Dr Emoto, perhaps from the movie “What the Bleep Do We Know?“, about his work with water crystals.

He visually documented that water would take on “the resonance of the energy” that was directed at it, leading to molecular changes in it.  See the pic below for an illustration of this. 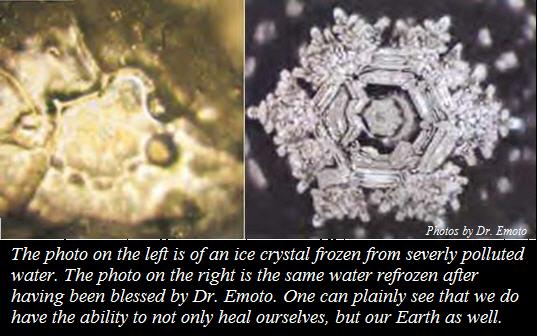 If water is so responsive to our thoughts and energy, what does that mean about our ability to heal and transform our body as it is over 70% water?

And what about for the world around us which is also over 70% water?

Last Friday, 17th October 2014, Dr Emoto passed away peacefully with his wife by his side, at the age of 71.  His last word was “Arigato” – “Thank you” in Japanese.

Below is an excerpt from “What the Bleep Do We Know?” that mentions the water crystals, it is around 50 seconds into the clip. 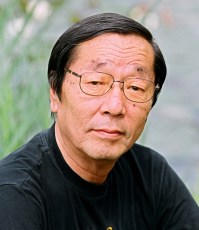 As I mentioned to you yesterday, based on requests sent in, this week on Manifesting Excellence we are covering “Flirting & Romance“.

We have flirting threads where we have been sharing flirting & romance resources, experiences as well as fun pick-up lines and much more.

One of the questions sent in which I will be covering on Saturday’s call/audio includes:

“I would like to have tips for confidence in flirting and keeping things light in dating/meeting new people… I’m either too serious (like a job interviewer) or too non-serious in using my time /attention on guys I know are not really for me.  If they seem like they have potential, I get too serious and probably way too uptight. If not, I can stay calm because I really can care less.”

We will talk about:

- How to take the pressure off yourself in situations (whether in dating, relationships, work etc)… and WHY to do that

- Any other questions you have?  Join us today and send them in!

Want to be a part of the fun, ?  Join us by clicking here.

Are you looking to meet someone and make it work?  Or deepen a relationship you already have?  Share your thoughts, experiences and questions!  Join the fun by clicking here.

“The Pony in the Dung Heap” Joke

This is a joke I heard yesterday and shared on Manifesting Excellence.  I later discovered that it seemed to be first heard from (President) Reagan.

It is to do with two sons, one an optimist and the other a pessimist.

It is apparently shared in Reagan’s biography by one of the Reagan team at the time, Ed Meese (excerpt from “How Ronald Reagan Changed My Life” by Peter Robinson):

The joke concerns twin boys of five or six. Worried that the boys had developed extreme personalities — one was a total pessimist, the other a total optimist — their parents took them to a psychiatrist.

Then he clambered to the top of the pile, dropped to his knees, and began gleefully digging out scoop after scoop with his bare hands. “What do you think you’re doing?” the psychiatrist asked, just as baffled by the optimist as he had been by the pessimist.

“With all this manure,” the little boy replied, beaming, “there must be a pony in here somewhere for me!”

“Reagan told the joke so often,” Meese said, chuckling, “that it got to be kind of a joke with the rest of us. Whenever something would go wrong, somebody on the staff would be sure to say, “There must be a pony in here somewhere!'”

So… when you are going through something challenging… remember to say to yourself “There must be a pony in here somewhere for me!” ;))

P.S. The topic this week is about “Flirting & Romance“… want to share some thoughts (or ask some questions)?  You can join here.